Nestled in the center of San Francisco. Eureka Valley, as the area surrounding the Castro is called, has evolved dramatically over the last century. Transitioning from religious to gay liberal and open neighborhood where the human rights are common sense.

Castro still remains the heart of the LGBT community in San Francisco, even the skyrocketing housing prices in the city!

Here is its interesting timeline…

The Swedish-American Hall at 2174 Market Street stands as an architecturally intriguing testament that the neighborhood was a Scandinavian enclave in the early 20th century. Starting in the 1930s and continuing until well after WWll, the area was a primarily-working-class neighborhood of irish Catholic residents.

By the 1960s, the once-fashionable Victorian houses in the neighborhood were in desperate need of maintenance and repair. During that decade San Francisco-long a magnet for counter-cultural movements like the Beat Generation and the Summer of Love had become a refuge to gays and lesbians, many of them discharged former military personnel who chose to stay in this liberal, welcoming city. As the City’s economy shifted to tourism and the American Dream became owning a house in the suburbs, many gay and lesbian newcomers took advantage of the depressed urban real estate market in neighborhoods like the Castro. While this initially served to drive prices even lower, the attention that these new property owners lavished on restoring their homes transformed the Castro into one of the most desirable neighborhoods in town.

By the early ’70s, the gay village of the Castro was firmly established and a community of LGBT residents and businesses, putting a rainbow spin on everything.

A decade later, the global pandemic called AIDS made an indelible mark on San Francisco and the LGBT community in the Castro the most deeply affected part of the City rallied to respond. Out of heartbreak, loss and anger emerged an extraordinary community effort to meet the needs of those who were struggling to survive, those who were dying, and those who were left behind. Castro residents and activists were part of the team that advocated for the City to fund the world’s first AIDS outpatient clinic at SF General Hospital.

Organizations like the AIDS Emergency Fund, Shanti, Project Open Hand and scores of others became models for other communities around the world in their responses to the AIDS epidemic. The breathtaking Names Project AIDS Memorial Quilt, the largest art project in the world, was born by Cleve Jones and other activists in 1987 at the present site of Catch Restaurant on Market Street near Castro 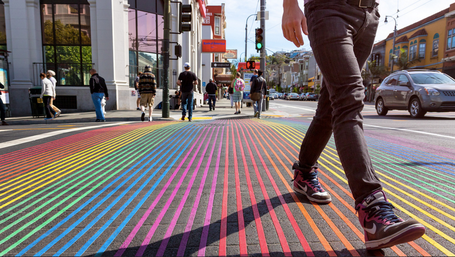 By 1995, when innovative medical treatments finally arrived on the scene, 16,000 San Francisco residents, many from the Castro, had died. The Castro has continued to transform during the last two decades. It remains the heart of the LGBT community in San Francisco, even as skyrocketing housing prices make it less accessible to new LGBT residents and those affected by the loss of long- time housing. Still, the SF LGBT Community Center stands sentinel at the entrance to the neighborhood at Market and Octavia Streets, the Rainbow Flag flies proudly high above Harvey Milk Plaza at Castro and Market, the GLBT History Museum on 18th Street reminds us whence we came, and Harvey Milk’s camera store is now occupied by the local Action Center and Store of the Human Rights Campaign.

As you stroll the rainbow crosswalks at 18th and Castro, remember that you walk in the footsteps of heroes, gay and straight alike.